A Family Garden in Belsize Park

Existing– This was a garden definitely in need of a facelift. It is medium sized and set below a semi-detached red brick house with a large red tiled terrace. The sad, neglected garden, well past its sell by date, sloped down towards an old panel fence and was shaded by a mature Ash and two large Plane trees. The existing planting was mainly composed of dull shrubs. Bindweed and ground elder grew in the beds and the ‘lawn’ was largely bare of grass. The old timber sandpit was rotting and the garden was hardly ever used by the family.

Brief – The clients, a professional family with three teenage children, wanted an attractive and practical garden. It would be maintained by Jeremy Bevan Gardens so did not need to be overly low maintenance. It had to have a large lawn and beds full of scent and colour, with ferns, grasses and screening plants. Room had to found for a small tree. The dismal, rotting sandpit which the children had long outgrown, in a shady corner under Plane trees needed a complete re-think.

Solution – The existing brick steps down into the garden were retained. The old Ash tree at the end of the garden was removed, and the Plane trees reduced in size, which greatly increased the available light and space in the garden. Much of the existing dark climbing Ivy was either removed or else drastically cut back and the rotten fencing on the end and right boundaries was replaced with a new fence of pressure treated closeboard panels. Almost all the existing planting was removed and more than 15 tonnes of new soil was imported to level out the garden.

The central part of the garden was laid to lawn with new RTF shade and drought tolerant turf and this was edged with hidden metal edging and oak mowing strips for ease of maintenance. New terraced beds of new oak sleepers were built in place of the old sandpit, with the same oak sleepers used to create a partially raised seating deck on the left of the lawn.

Light levels in the garden ranged from full sun near the house, through partial to deep shade and the new planting reflects these different conditions. Lavender, Sage and Iris, russet red Heleniums and white Japanese Anemones amongst others, associate with architectural Cardoon and bronze Phormiums and grasses in the sunnier beds. Woodland planting includes two Tasmanian Tree Ferns, a large Japanese Maple and a Camellia, all under planted with ferns, Bleeding Heart, Foxgloves and other shade loving plants. The fences are clothed with sweet scented Honeysuckles, Passionflower, Star Jasmine and Roses, with ornamental Vines, Clematis and a Silk Tassel Bush .

A relatively simple design transformed this dank, dull space into a delightful garden full of colour, scent and year round interest. 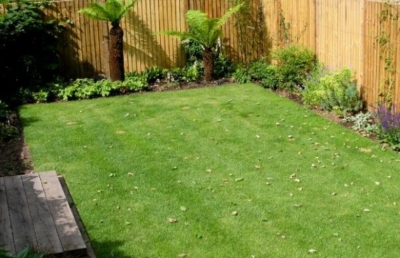 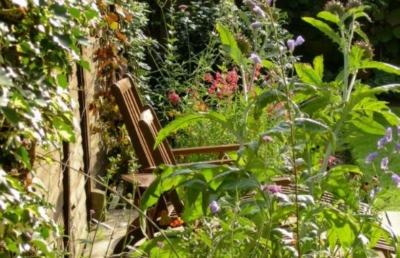 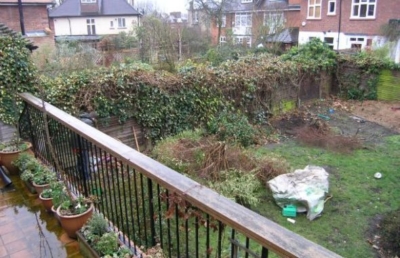 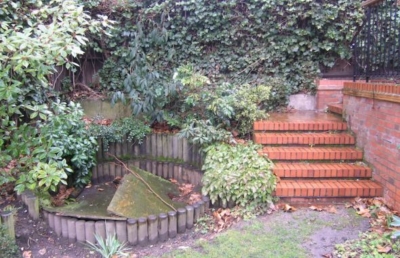 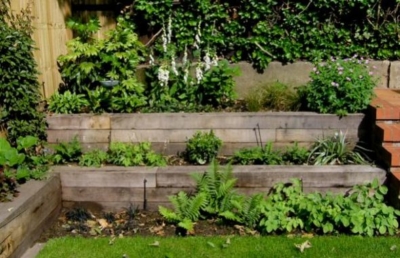 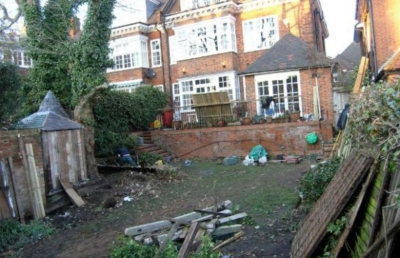 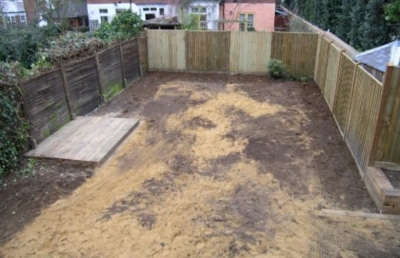 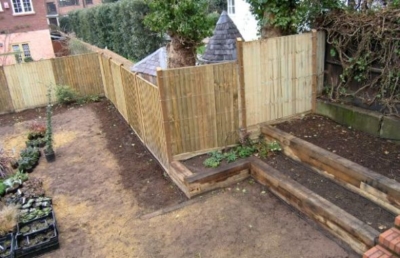 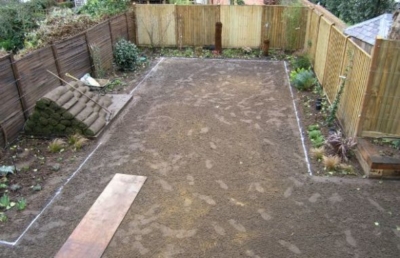 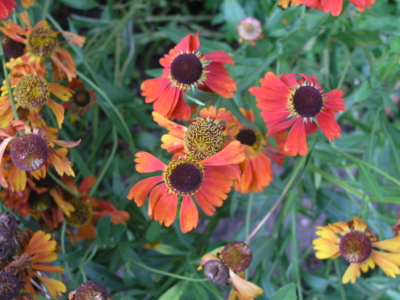